We’re not very good at blowing our own trumpet – to be honest we’re always too nervous to do so based on the fact we’re always so busy, and for that reason, most of the time we’re simply not looking for new work.

However, the websites and systems we design and develop really are very good and so we should take the time to tell you when our work has been recognised.

It seems slightly old news now, but back in September we received notification that two of the websites we’d developed had been nominated in three categories of the Hertfordshire Digital Awards.

Having websites nominated and winning awards isn’t new to us, and we’ve won a number of awards over the years. However, as the Hertfordshire Digital Awards (HDA) were far more specific to our industry and geographically covered our key target area, we took the nominations a little more seriously than many of the other less specific nominations and awards we’d received in the past. In fact, one of our website had actually received a Bronze Award at the 2015 HDA ceremony, which was the first year they were operating in our region. 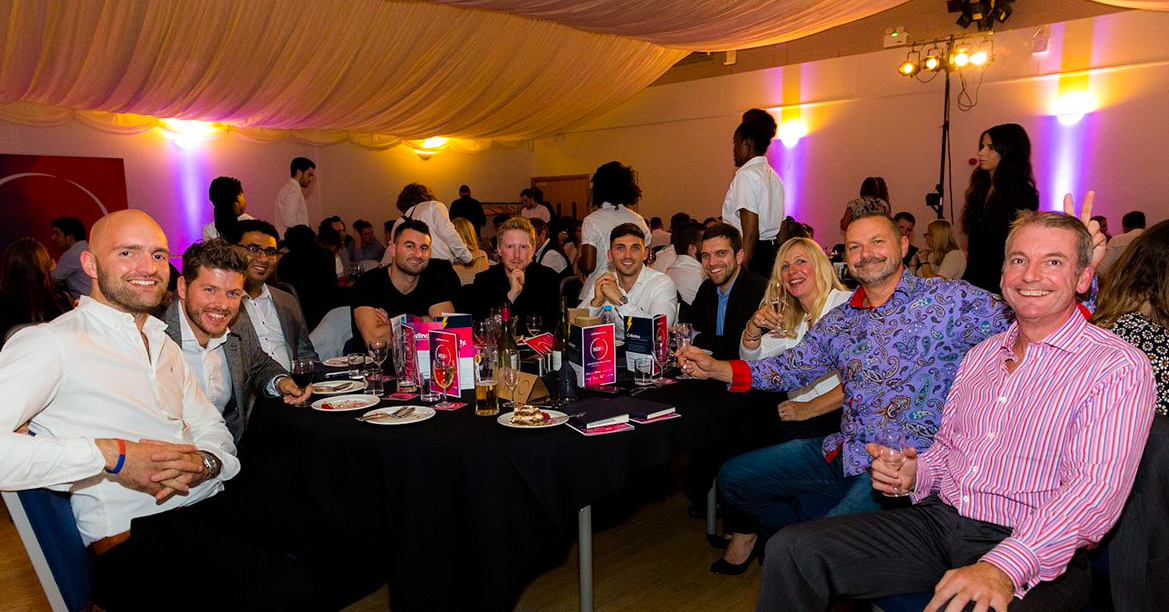 So despite only being in their second year, as a company we decided to give them our support and booked a table of 10 for the award evening. Six of our customers, including those who’s websites had been nominated, joined us for what was a very enjoyable evening, made better by the fact we won a Gold and two Silver awards.

The Gold award was won in the ‘Small Business’ category for the Holiday Tots website we developed almost two years ago back in December 2014, for a customer who we first worked for on a previous version of the site over six years ago. The site which caters specifically for child friendly holidays, has gone from strength to strength over the past couple of years and despite being nearly two years old, is still very modern looking and extremely user friendly, proving that the fully bespoke websites we build are ‘ahead of the curve’ when it comes to both the design and development methods used. 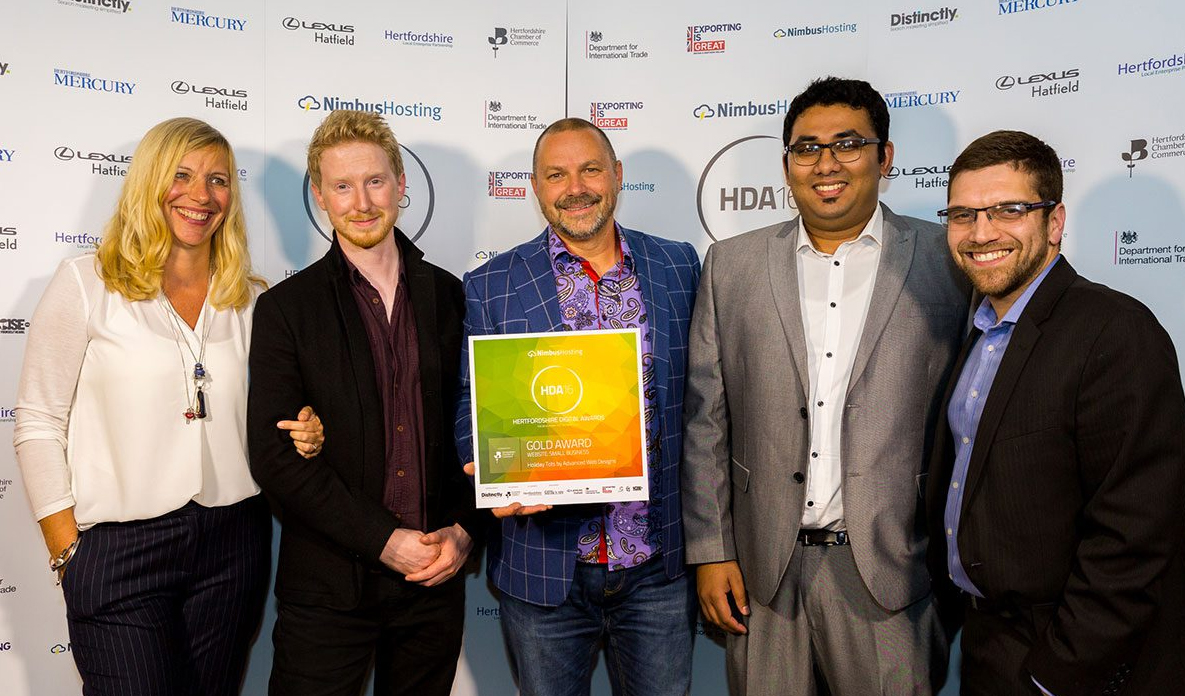 The two Silver awards were won in the Tourism & Hospitality, and Sports & Entertainment categories, for Holiday Tots and Onpoint Training respectively.

Onpoint Training is a business which only moved to Hertford from London at the start of the year, and as a personal training business, needed to quickly build up their client base and build a reputation for being the best in Hertford. A well optimised and engaging website was therefore going to be a key marketing tool to help ensure the businesses quick growth, and so it was fabulous for us and our customer that the site had been acknowledged at the awards. 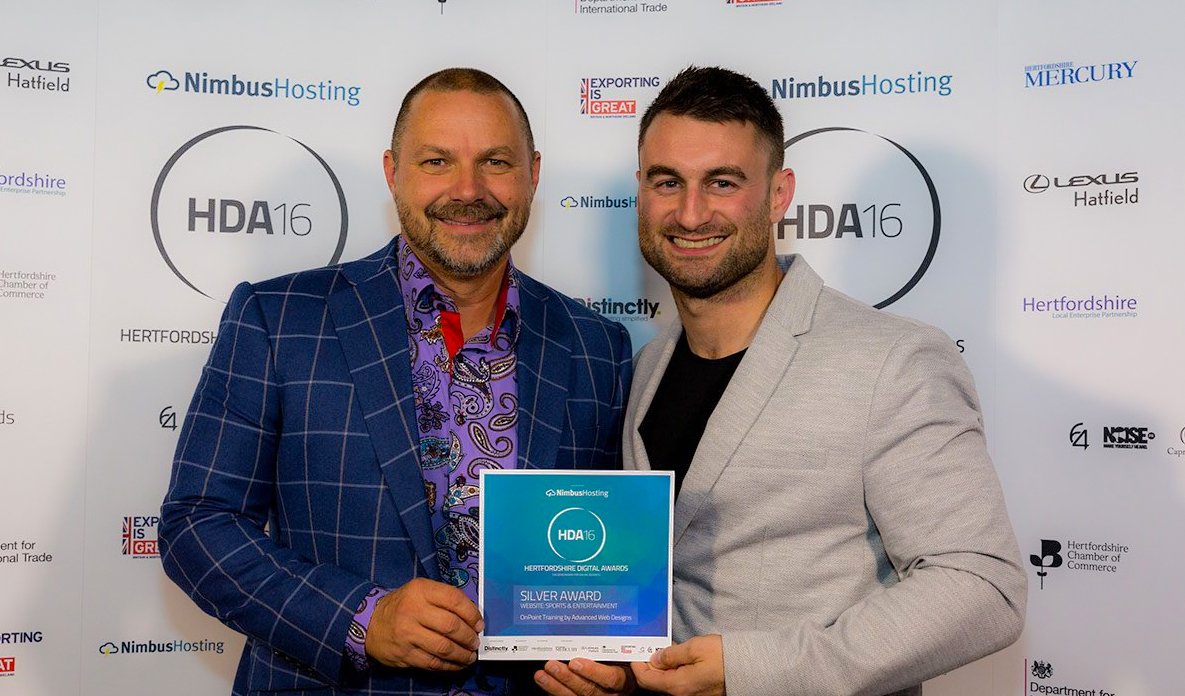 The awards were also a great way for the team at Advanced Web Designs to get some recognition of the hard work and great websites they produce on a daily basis, and I am really please to say that we have already picked up a new project as a direct result of winning one of these prestigious awards.

Probably our greatest Unique Selling Point is that fact that all of the websites we build are fully bespoke. Not just the design and development elements, but even the scalable Content Management Systems which allow our customers to fully manage all of the content throughout their website, are uniquely developed to suit each client’s specific requirements.

Furthermore, all websites we’ve developed over the past three years have been designed to be fully responsive, ensuring they provide the best possible viewing experience for visitors to the website, no matter what device they are using to browse the site.

We have certainly enjoyed being a recipient of these awards, which were voted for by a panel of experts from local IT related businesses, and aim to improve on this year’s tally of awards in 2017.